I’m back from the longest hiatus ever! I spent the loveliest 2 weeks back in England with my boyfriend Chris and we had 3 amazing days in Disneyland Paris. After all that fun I had to come back straight to work so it’s safe to say I’ve been fully occupied! 😔

If you didn’t already know, I am a huge Disney fan and it had always been my dream to visit Disneyland with him and he made it come true – complete with the Eurostar bookings and a 2 night stay at the Vienna House Dream Castle hotel. I am forever grateful!

We started off our adventure with a 2 and a half hour journey to Paris via the Eurostar from London St Pancras International. We totally missed out the memo that said we had to be there way earlier than our boarding time so by the time we reached there, the ticketing lady told us we had to really try to push past everyone in the queue which we absolutely did not want to do.

The journey to Paris was surprisingly easy, the seats were comfortable and we had 1 charging socket each, which for a social media addict like me, was a big plus point.

When we reached Paris, we had our complimentary Disney Express service provided where they took our suitcases straight to our hotels so we could go straight to the park. It’s a great service and the queues moved very quickly so I would highly recommend everyone to get on board with it to save time especially if you’re arriving in the afternoon.

It rained when we got into the park at around 3.30pm but I was way too excited to care about that. I even had canvas shoes on but who cares when you’re in Disneyland! The Christmas decorations were incredibly beautiful too.

The queues weren’t crazy and the first thing we did when we got into the park was pop into a shop to get our Disney Ears! I got a Marie pair and Chris got a Sorcerer Mickey pair. I then decided to also get a Green Alien hat due to the rain and also because he’s a cutie. 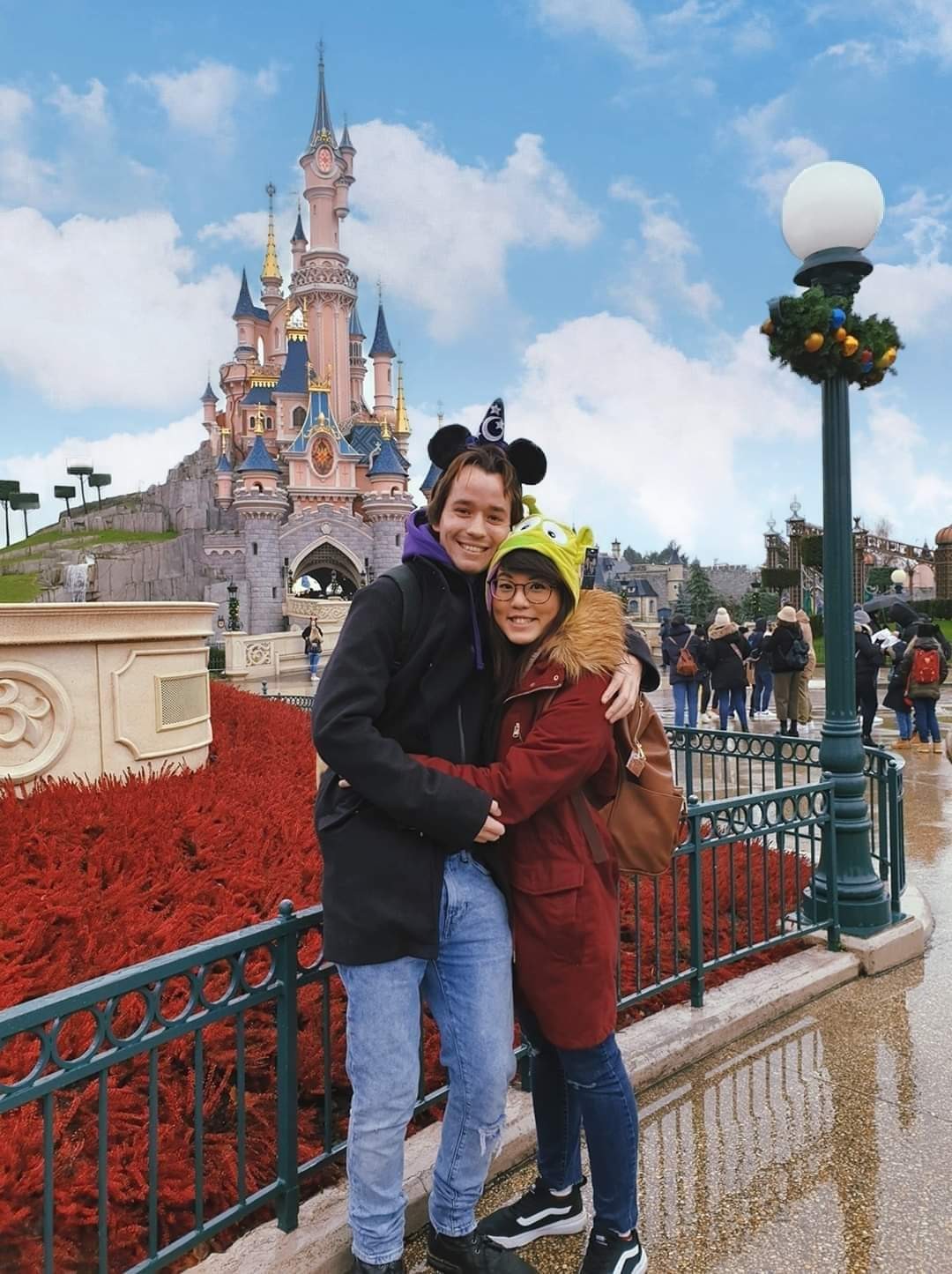 Thanks to a very kind stranger, Chris and I managed to get a nice couple-y picture in front of the castle which I really wanted but wasn’t sure we’d get as I get embarrassed asking people to help take pictures for me. I hope to get this photo framed up one day as it is definitely one of my favourite photos of us.

Walking down Main Street was a DREAM. I see pictures of it all the time on Instagram and videos on YouTube and it is so beautiful I was almost in tears. Especially with all the Christmas Decorations, it got me real excited.

The first ride Chris and I went on was Peter Pan’s Flight as it is one of my favourites! The queue was pretty long, we spent about an hour out in the drizzle but we were entertained by looking through the Disneyland Paris app to see which rides to go on next as they tell you how long the queues are.

Peter Pan’s Flight was amazing as usual. Right after that we went over to Pirates of the Caribbean as the queue was very short and that was fun too! It was also my first time on the ride.

At this point, Chris and I started to feel a little peckish so we dropped by Restaurant Hakuna Matata for lunch. The food was lovely and the interior decor was so cute.

We went on Big Thunder Mountain after that as it is my boyfriend’s favourite ride in Disneyland and man, it was wilder than I remembered, but a lot of fun.

I was very excited about the next fact – Phantom Manor had NO queue! As it is one of the most sought-after rides in Disneylands across the world, I was very shocked and we raced over to get into what was left of a line and the ride was amazing! It is definitely not one to be missed especially if you love getting slightly spooked. The manor from the outside was incredibly beautiful as the sun started to set.

As it started to get darker, Chris and I wandered around until the fireworks started and the show was amazing. You can view the full fireworks show here – it was beautiful. The crowds had started to gather and as I’m 5’1 it was a bit hard to get a 100% view but I still enjoyed every bit of it.

Towards the end of the night, Chris and I realised Hyper-Space Mountain (previously Space Mountain) had a 5 minute queue so we rushed over to catch it while we could.

It was a crazy ride! I had been on it before but I could swear it went through a refurbishment or something as I don’t ever remember it being this crazy. At some points I really felt like I was about to fly out of my seat or my head was going to be snapped off. It is definitely not one for the fainthearted or if you have any back or neck problems. When I got off my legs were like jelly!

Chris and I ended our first night in a Planet Hollywood cafe where I had a Hollywood Bowl salad that I couldn’t finish and 3 glasses of apple juice 😂 (it must have been all that walking, my feet were aching really badly at this point!)

We took a 15 minute shuttle bus back to Vienna House Dream Castle Hotel and checked into our room which was lovely! I’ll be posting a separate review on the hotel another time but what I can say is it was a very good experience.

We settled down at about 10pm after a hot shower and I passed out within seconds I was that tired!

Thank you for reading my post on my first day at Disneyland! Day 2 awaited me ~